My new hard disk is 698GB, and it only has 16.1GB used as I keep all my
music, pictures, and so on using a Samsung 2TB eternal USB drive. Is there any
way to burn/copy the 16.1GB to several blank DVDs for possible future
re-installation of all files, like all Windows XP PRO, Microsoft updates, and
so on?

Wanting to save a large amount of information across multiple CDs or DVDs is
not an uncommon request. Yours is particularly specific and has a pretty clear
answer, but as it turns out, the general case of just having “a bunch of stuff”
that you want to save to DVDs or CDs is also fairly interesting.

I’ll start with my recommended approach for your specific request and then
branch out into some other alternatives – some even easier – for the more
general purpose case.


Use your backup program

What you’ve described is actually something that I strongly recommend to people: take a system image backup so that you can restore to that backup in the future should you ever need to reinstall Windows. Restoring to this image backup is typically significantly faster and combines several steps including format, install, and update.

The good news is that many backup programs support exactly what you need: writing the backup image to one or more CDs or DVDs: 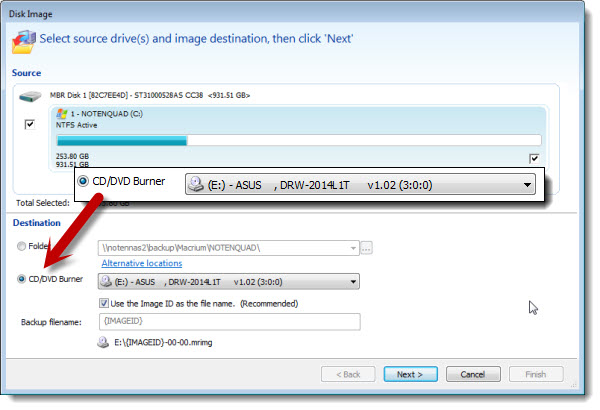 So one solution is very simple: use your backup program to make an image backup of the system and select CD/DVD as the output for that backup and the utility will take care of the rest.

To be honest, my gut reaction is to question the use of DVDs at all. Small external hard disks – or even flash drives – are inexpensive and might be a more viable approach for this kind of operation.

For your specific example, the solution that I’d recommend would be extremely similar to the DVD scenario: use your backup software to create an image of your machine, saving it to an external hard disk or flash drive.

It’s a single operation without a lot of DVD swapping both at creation time and when the time comes to use the image.

First, collect the files that you want into a single folder.

Then, backup that folder.

Instruct your backup program to backup that folder and everything in it, and have it write the backup to CD/DVD. It’ll automatically split the backup across as many discs as needed.

When the time comes that you need the contents of the discs again, just fire up your backup program and “restore” from the discs.

Many of the popular file archiving utilities will allow you to split the generated archives into pieces of some maximum size. For example, the command line version of 7-zip lets you do this:

7-zip will create the archive “archive.7z” which contains all .jpg files in the current folder, but as the size of the archive being output exceeds 4 gigabytes, it’ll create separate numbered files: archive.7z.000, archive.7z.001, archive.7z.002 and so on – each no larger than 4 gigabytes. (7-zip doesn’t appear to accept decimal points, so to get close to the capacity of a 4.7GB DVD, you might specify 4800m – 4,800 megabytes, which is just under 4.7 gigabytes.)

Other popular utilities, like WinZip and WinRar, are apparently also capable of splitting the generated archives into multiple files.

Of course, if you google “file splitting tool,” you’ll get many, many results. Most of all of them work on the concept that you already have a single file which simply needs to be split into pieces. When you’re archiving a large number of smaller files into something that totals a size larger than your CD or DVD media, an archiving tool like 7-zip really is easier. (In fact, I’d go so far as to use these tools to split even a single oversized file.)

Finally, once you have those multiple files, you would then need to burn each of them individually to the appropriate media, be it CD or DVD, using a tool like ImgBurn.

To me, it still seems easier to do it all in one step using your backup software.

3 comments on “How do I save a large amount of information across multiple DVDs?”