Every time I turn on my computer, I get the Quicktime Icon in the system
tray. I ran MS Config and unchecked the line labeled “qttask” and rebooted but
in a few days it comes back. What can I do to stop it once and for all from
appearing in the system tray?

This is a clear case of an application vendor thinking they know what’s best
for us, regardless of what we really, really want.

The problem is simple: every time you update Quicktime, it re-installs the
Quicktime icon in the system tray:

This is compounded by the fact that Quicktime can get reinstalled as a
result of other programs being installed or upgraded. The most common offender,
at least on my machine, is iTunes. Each time iTunes is updated, no matter what
I’ve done, the Quicktime tray application comes back.

What I do to get rid of it is to right click on it and select
Quicktime Preferences. In the resulting dialog, I then click
on the Advanced tab: 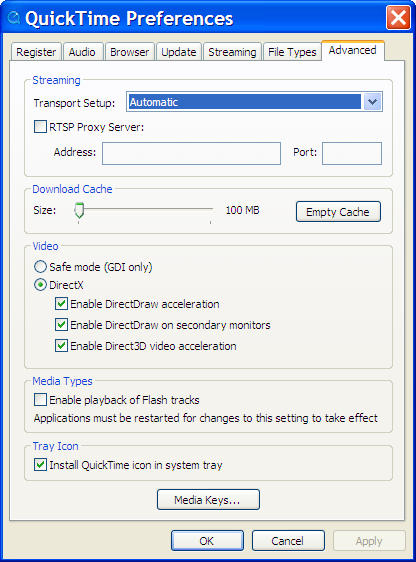 I then make sure that the checkbox labeled Install Quicktime icon in
system tray is unchecked:

As soon as I click OK on that dialog, the tray applet goes
away.

Until the next time Quicktime is updated.

Some folks have reported that this isn’t enough for them, and that it comes
back on their next reboot. They’ve had to take an extra step:

“To have to have it repeatedly reappear even after I’ve
explicitly told it to go away is, to me, exceptionally arrogant software
behavior.”

And, once again, the next time you update Quicktime, you’ll have to repeat
this process.

One alternative that I’ve heard of but haven’t tried myself is something
called, surprisingly enough, “Quicktime Alternative”. It’s a free codec
(coder/decoder) for Quicktime files that will allow you to view them without
Quicktime. Instead you can view them in other viewers such as Windows Media
player or other applications.

My only hesitation is that I’m unclear on the interaction with other
applications such as iTunes. I would expect that an update of iTunes will once
again install Quicktime – and its icon.

Certainly just living with it is an option. Aside from taking up space and
some of your computer’s memory, the Quicktime icon is fairly benign. It doesn’t
add any value, in my opinion, but it also doesn’t impact your computer’s
performance that much either.

For me, it’s as much about the principal of the thing as it is anything
else. I do dislike a cluttered tray (seems every application feels the need to
put something there), so I definitely want the option to turn it off. The
Quicktime tray item, as far as I can tell, adds no value. I see to
reason to ever want to use it, or for it to exist – Quicktime works just fine
without it. To have to have it repeatedly reappear even after I’ve explicitly
told it to go away is, to me, exceptionally arrogant software behavior.

And a repeated annoyance.

8 comments on “How do I get rid of the Quicktime Icon in the Windows System Tray?”