My Toshiba laptop was bought in January with Windows 7 & IE9 installed,
but the IE9 has never worked. I’ve rolled back to IE8 and that’s fine (except
now Gmail doesn’t support IE8). Windows Updates demands that I install IE9. The
problem with IE9 is that the tabs load and show properly across the top, but
the screens below are blank. Some windows show a couple of pics from the
website in the tab, but then these won’t go away even if you change the
tab… it’s just a frozen blank screen. I can’t do searches or view anything.
I’ve tried uninstalling and reinstalling; I’ve also tried resetting to
default settings – no luck.

It is possible to tell Windows to stop bugging
you about the IE9 update.

The problem with that is that it’s not really solving anything, just
delaying it. It might be a fine interim solution, but sooner or later, you’re
going to want to update to IE9 or one of its successors.

The symptoms remind me that IE9 added some functionality that – when
working properly – would make it faster. Perhaps it’s not working
properly.

The good news is that we can turn it off.

Hardware is faster than software. Software is more flexible, but as game developers have known for years, if you can have a piece of hardware that’s dedicated to helping you do what you do – like perhaps draw things on the screen – your application can run significantly faster.

The net result is that IE9 is faster and uses less of the CPU (your computer’s Central Processing Unit), leaving that more available for other programs.

In IE9, click the gear icon and then Internet options: 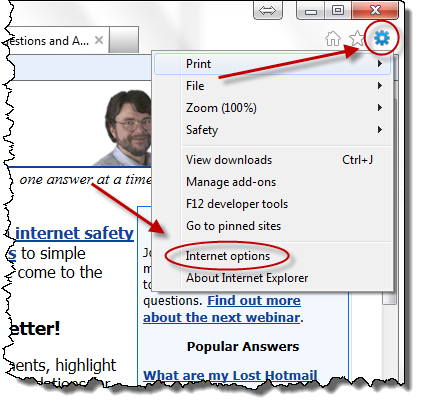 In the resulting Internet Options dialog, click the Advanced tab: 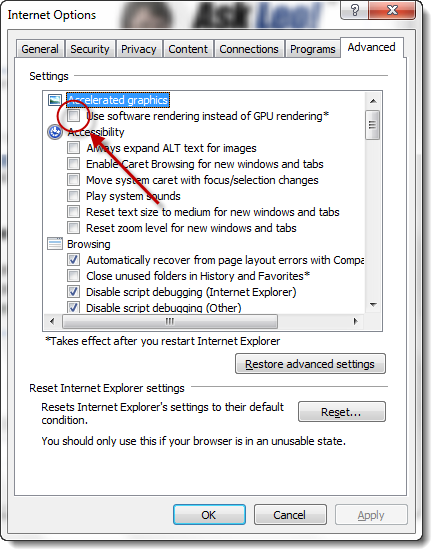 At the top of the advanced list of options in a section labeled Accelerated graphics is a checkbox: “Use software rendering instead of GPU rendering”.

Make sure that checkbox is checked, to force IE9 to do things in software rather than using the GPU.

After changing it, the asterisk means that you’ll have to restart IE9 for the change to take effect.

See if that doesn’t help things.

I don’t always hear back from folks, but I asked this particular person to let me know because I wasn’t 100% sure that this was the actual solution.

It worked!
Thank you soooooo much!
Now I can use IE9 for the first time and stop Windows from hassling me about updating my IE.

Put simply, IE9 wasn’t compatible with the graphics card (or vice versa, depending on how you want to look at these things). Simply disabling the accelerated graphics returned IE9 to the older way of doing things.