I have Windows XP Professional. How do I delete screensavers? When I click on my desktop and properties and I go to my
Wallpapers and Screensavers, there are a lot that I downloaded and would now like to delete, can I do that?

Yes you can. It’s just a matter of knowing where Windows stores them.

Oh, and then perhaps beating Windows over the head a little as it tries to restore these “critical system files”.

Screen savers are easy to locate. Windows keeps them in the SYSTEM32 folder within the Windows folder. The file
extension is “.scr” for “screen saver”.

Here’s a list of the default screen savers that came with my new machine located in the c:\Windows\system32 folder: 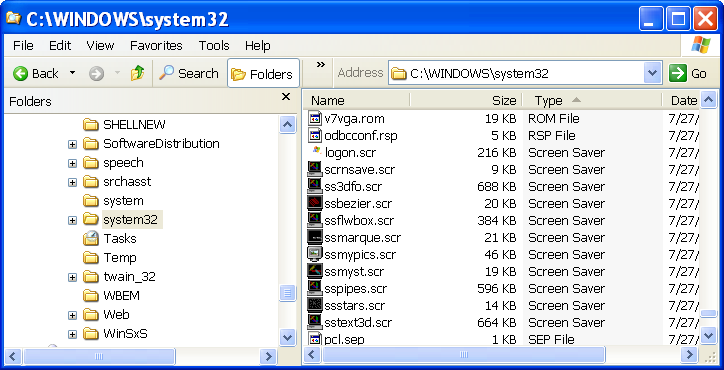 If you’re deleting a Windows default screen saver, there is no such luck.

The default Windows screen savers are apparently protected by “Windows File Protection”. This service of Windows monitors for
files which are changed or removed without Windows knowledge. The idea is that by making sure only “official” copies of important
system files are present, any attempt to replace them with broken or malicious copies would be detected and reverted.

And by reverted, I mean that the original copy of the file would be replaced.

So, yes, go ahead and delete one of the default screen savers. And then watch it quietly and magically reappear a few minutes
later as Windows File Protection performs its magic.

In an ideal world one would go to Control Panel, Add/Remove Programs, and then
Add/Remove Windows Components where you’d find something relating to the screen savers.

This is not an ideal world. There’s actually no option to remove the screen savers.

So this is where we get tricky.

But it’s still not quite that easy. Once you delete them both you’ll get this warning:

Why Windows screen savers are “required for Windows to run properly” is beyond me, Windows runs just fine without them. So,
click Cancel, and you’ll get yet another dire warning:

Note that the error message is actually incorrect: we don’t have the “wrong” version, we have no version at all. Particularly
when it comes to screen savers it’s fine to say Yes, and keep these nonexistent “unrecognized versions”.

By and large it’s safe to delete screen savers, though if you’re at all nervous then by all means copy them off to another
location, back them up or burn them to CD to save them “just in case”.

11 comments on “How do I delete the default screensavers in Windows XP?”