How do I defragment my new E: drive? Or is that not something that can be
done?

Can be done? Absolutely, and I’ll show you how I go about it.

The real question is: do you need to? If the drive’s new, that answer’s
probably no. I’ll explain why, too.

First, let’s review just what defragmenting is. When files are stored on a
hard disk, they are stored in pieces (called sectors or clusters) that could be
scattered all over the hard disk. The first part of a file could be on the
inner ring, the next could be on the outer and the next somewhere in between,
and so on. In order to read the file in order, the hard disk’s reading
mechanism or “head” must move to each of those locations in order. If a file is
really spread out around the hard disk, it’s “fragmented”, and can cause a
lot of head movement which, in turn, can slow down the speed at which your hard
disk appears to deliver files.

Defragmenting is nothing more than rearranging the pieces of every file so
that they are physically in order on the disk – in other words they’re very
near each other, and reading a single file requires little or no head movement
and can happen at maximum speed.

While the operating system does try to arrange files optimally,
things still can become fragmented over time, so it’s a good idea to defragment
them every so often.

Now, about your new hard disk.

So if you just got a new empty hard disk, there’s no need to defragment
it.

Now, let’s say it’s an older disk in need of defragging. There are two ways
to go about it, in Windows XP.

Use the Command Line

This, to me, is one of the easier ways to do it. Click on
Start, then Run, type in “CMD” and press
OK.

In the resulting command prompt, type defrag e: where “e:”
is the drive you want to defragment. The result should look something like
this: 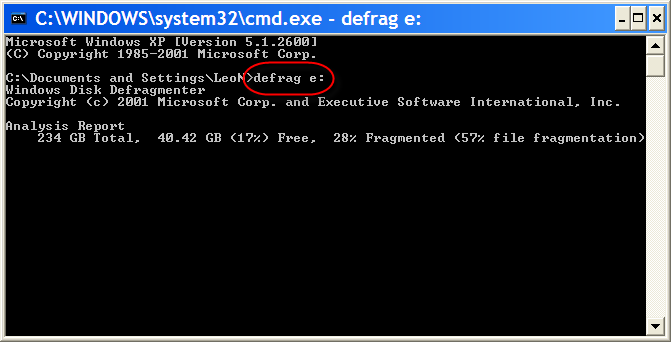 It’ll first do an analysis, reporting on just how fragmented the hard disk
is, and then go on to defragment the hard disk. You can see that this disk I
used as an example, is fairly fragmented. It’s my backup disk, so it doesn’t
matter as much, but I should probably let the defragmenter run.

Naturally there is another user interface within Windows to defragment hard
disks that doesn’t require using the command line. 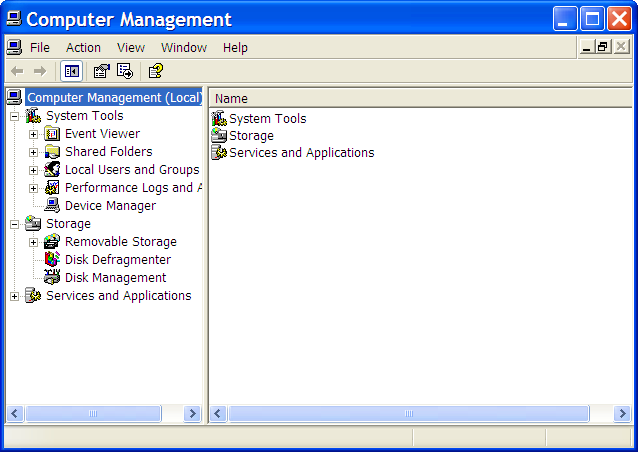 Click on Disk Defragmenter, and (perhaps after resizing the
window so that all drives show) you’ll see something much like this: 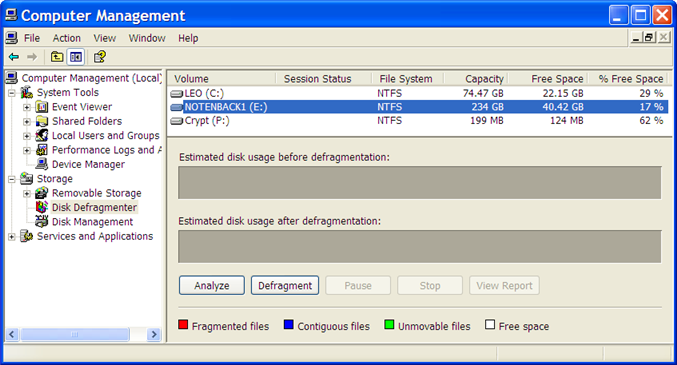 Here you can click on the drive you wish to defrag, and press the
Defragment button to begin the process.

The Third of Two Ways

I know, I said there are two ways to go about defragging your hard disk, and
I’ve listed both of them above. However, there’s another approach that doesn’t
use a defragmenter at all, yet ends up with the same result.

There are two catches: it can’t be used on system drives, and you
need enough room on some other drive to hold everything that was on
the drive you want to “defrag”.

This method relies on two principals:

By now, you can probably guess where this is going.

That’s it. If you now run one of the defragmenting analysis tools, you
should find that the drive is totally, or nearly totally, defragmented.

And remember, you cannot use this type of defrag on your system
drive – the drive containing Windows. You won’t be able to copy everything off,
and deleting everything will a) not work, and b) crash Windows in the
process.

My machines are busy, and they’re on all night, so one of the things I do is
run the “defrag” command line tool every night while I’m not using the machine.
(Though, I obviously don’t run it on my backup drive.) While nightly might be a
little overkill, I actually recommend some kind of automated defrag every so
often – say once a week or so – if you use your computer a lot.

For more typical users, firing up the defragmenter’s Windows user interface
every so often makes sense. Particularly if you notice your system slowing
down, and even more so if you notice it slowing down in conjunction with a lot
of hard disk activity.

15 comments on “How do I defragment my new hard disk?”