I am having the hardest time trying to understand how to save files to CDs.
Do you have to format a CD first? Do you have to use a program like Roxio?
Personally, I would rather use Zip disks as it seems much less complicated to
save a file to one of these. The drawback, as we know, is the amount of storage
on those compared to CD’s. On one occasion I wanted to save a file to CD-RW so
I could go back later and change or update information in that file. I wasn’t
allowed to make any changes even though it was a CR-RW. Please help me as I am
so frustrated with CD’s.

There many approaches to CD and DVD burning. Rather than say “this is how
you must do it”, I’ll show the basics of Windows XP CD burning and then touch
on a couple of the alternatives that you might investigate as well.

The problem with CD burning is that it’s grossly inefficient to burn one
file at a time to the media. What happens instead is that using CD burning
functionality, either of Windows itself or another utility, you first collect
the files you want to burn. Then once you’ve assembled the contents of what you
want on the CD you burn it.

“… you actually don’t need any special software for
the basics of burning a CD, since the support is built into Windows XP.”

Burning a CD in Windows XP

As it turns out you actually don’t need any special software for the basics
of burning a CD, since the support is built into Windows XP.

Windows attempts to make the collect and burn steps as friendly as possible
my making it look like you’re copying individual files to the CD, when
in fact you’re copying to a temporary area. Once you’re done you can then
instruct Windows to actually burn the CD.

Step one is to open Windows Explorer (double click on My
Computer is one quick way), and then right click on the drive that
represents your CD/DVD drive: 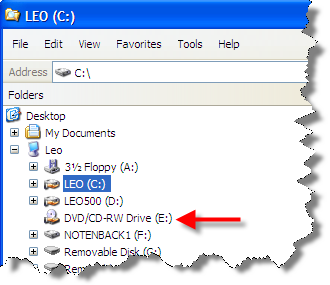 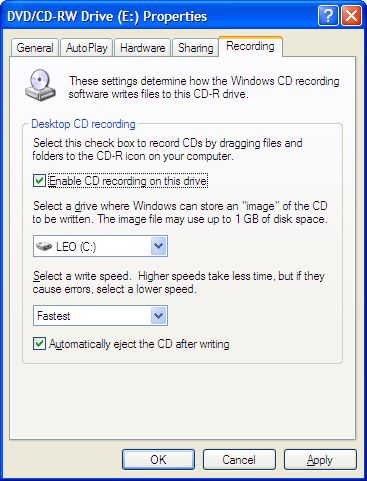 Make sure that Enabled CD recording on this drive is
checked. At the same time, make sure that the drive listed has enough room as
described in the dialog, or select another drive that does. Click
OK.

Now you can copy files to your CD using Windows Explorer. Simply click and
drag files from wherever you have them on your hard drive and drop them on the
CD drive in Windows Explorer: 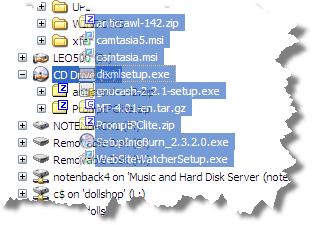 It’s a little difficult to see above, but what I’ve done is selected a
number of files and then dragged them on top of my “CD Drive (E:)” icon in
Windows Explorer. This image is taken immediately prior to letting go and
“dropping” them on the drive.

Once you’ve copied files to the drive you’ll get this pop-up:

This reminds you that you’ve begun the process of collecting files to be
written to the CD.

After you drop files onto the drive you can actually click on the drive to
see what you’ve placed there so far:

Windows has copied the files to a temporary location in preparation for
burning the CD, but hasn’t yet written anything. To actually burn the CD, right
click on its icon one more time, and click on Write these files to
CD.

You’ll first be asked for a “name” or label for the CD: 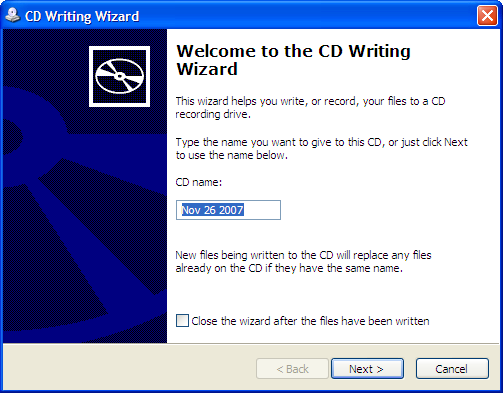 Today’s date is a good choice, or something else that will help identify the
contents of the disk.

Press Next and writing will begin. It’ll cycle through
“Adding data to the CD image…”, “Writing the data files to the CD…” and
finally “Performing final steps to make the CD ready to use…”. Once complete
your files have been written to CD. You can take the disk to another machine
and verify that everything you expect is there where you expect it.

Note: you’ll need to make sure that you’re not writing more
to your disk than it can hold. Normal CD capacity is around 650 megabytes.

Windows allows you to add files to your CD by simply repeating the steps
above, however this does slightly reduce the capacity of the drive as each time
you add files Windows adds a certain amount of overhead as well.

What about CD-RW disks?

CD-RW disks can be rewritten, but that doesn’t mean that you can simply
treat them like a hard drive. It does mean, however, that you can erase them
and write new content to them.

When you insert a CD-RW disk that contains data an additional option appears
if you right click on the drive: “Erase this CD-RW”. Click on that and after
confirmation Windows erases the contents of the CD-RW.

After that, you can simply repeat the process of writing files to the CD as
you’ve done above.

What about DVDs and DVD RW?

Unfortunately on my machine running Windows XP the processes I describe
above appear to work only with CDs and not DVDs, even though my drive is DVD
capable.

Alternatives are called for.

My recommendation is actually a freeware utility called ImgBurn. The concept and process is the same, though
through ImgBurn’s “Build” UI instead of within Windows. You add files to a list
to be burned to the CD or DVD, and once done push a button to burn. Like
Windows you can erase RW media. Unlike Windows, ImgBurn will easily show you the
amount of space you have available on whatever media you happen to be writing
to.

ImgBurn will write to whatever your device is capable of, be it CD, DVD or
even (apparently) HD-DVD and Blu-ray! Rather than enabling the writing
abilities within Windows, I actually use ImgBurn for all my CD and DVD
burning.

Another alternative are programs like Roxio or Nero. I’ve not used Nero, but
have used Roxio for many years before switching to ImgBurn. Roxio includes a
feature called “Drag To Disc” which works much like Windows, allowing you to
copy files to and from the CD using normal Windows operations, and then burning
the media when you’re done. Roxio also includes a “classic” burning utility
that works much like ImgBurn, providing a UI into which you drop files,
collecting them until you click on a “burn” button to actually write the
CD.

Note: comments about CD and DVD drives that don’t work will be deleted.
That’s not what this article is about.

14 comments on “How do I burn something to CD?”