It can be hard for you to tell.

Windows 10 is updated fairly frequently, but not all of those updates are the same. I'll review what happens when.

There’s a temptation to say that Windows 10 is almost continually updated — we certainly hear about it in the press often enough.

In reality, the answer to this question is more complicated than “all the time”. It’s also changed over the last (nearly) five years of Windows 10 releases.

Believe it or not, there’s some method to the apparent madness.

Windows 10 get major updates twice a year, regular feature and security updates once a month, and high priority “out of band” updates as needed. Depending on your edition of Windows — Home versus Pro for example — you may have some, though not total, control over the exact timing of each.

Twice a year, Windows 10 gets a “feature update”. These are the updates that get a formal version number, like “1909”.

“19” refers to the year — in this case, 2019  — and “09” refers to the targeted release month: September. The next feature update release is 2004, meaning its release target is April of 2020. The release generally becomes public the month after the targeted month as last minute issues are addressed.

All feature updates are not the same. Microsoft seems to be leaning towards an annual “major” feature update, with a less aggressive update six months later. It’s unclear if this plan will persist.

An update is available, and you wonder: Should I Install the Latest Windows 10 Update?

On the second Tuesday of every month, security and bug fix updates (called “quality updates”) are released. While occasional features seem to make it in from time to time, “Patch Tuesday” is primarily focused on fixing issues rather than adding new functionality.

Patch Tuesday gets the most press, because the every-six-month feature updates discussed above are delivered using the same mechanism.

Patch Tuesday also gets the most press because problems  — or perhaps just reports of problems without actually experiencing one — are associated with Windows Update.

It’s important to realize that while the updates are released on Tuesday, they may not make it to your machine for several days, because the downloads are spread out over time. In addition, your delivery settings may also impact when updates (both patches and feature updates) are delivered.

Microsoft really, really, REALLY wants you to take updates as they become available.

In response to bad press relating to update failures, however, they’ve made it possible to delay Windows Updates for a time.

In Windows 10 Home edition, you can pause updates for seven days repeatedly for a maximum of a month’s delay.

After that, Windows Update re-engages.

On rare occasions, a problem is important enough to justify an “out of cycle” update. These are typically related to security, usually due to a vulnerability being found, so Microsoft pushes a fix for a specific problem.

While rare, this can happen at any time.

I continue to recommend leaving Windows Update enabled and to take all updates without delay. I know some disagree with this approach, but I believe that coupled with appropriate backups (in case you need to revert an update), it’s the best way to keep your system as functional and as secure as possible, without having to remember to take any action.

Windows 10 quality updates are released monthly, on what’s become known as “patch Tuesday”, the second Tuesday of the month. Quality updates include non-critical fixes and security updates, as well feature previews and other updates to Windows itself, as well as the apps it contains.

Absolutely you can still use Windows 10 after 2020. What will be important will be to keep it updated. Each half-yearly feature update extends the life of Windows 10 on your computer for at least another 18 months. Even after feature updates are no longer available for your version of Windows 10, you can continue to use it as long as you proceed with caution, realizing there will be no further security fixes either.

Should I update Windows 10 regularly?

As a general rule computer security professionals advise keeping Windows 10 as up-to-date as possible. This means taking updates regularly, shortly after they’ve been made available. This is important because those updates often contain fixes to security-related issues that could put your computer at risk if not updated. If you’re concerned about the possible impact of a Windows 10 update, be sure to back up completely first.

How long does Windows 10 update take?

On average a Windows Update will take about 15 minutes, however, this can vary dramatically based on the speed of your computer and the magnitude of the update itself. Half-yearly feature update, for example, is generally quite large and can take significantly more time. Not all “patch Tuesday” updates are the same, and some may complete very quickly. Without knowing ahead of time, it’s generally a good idea to set aside some time so that if the update takes an excessive amount of time you won’t be inconvenience.

Is it OK not to update Windows 10? 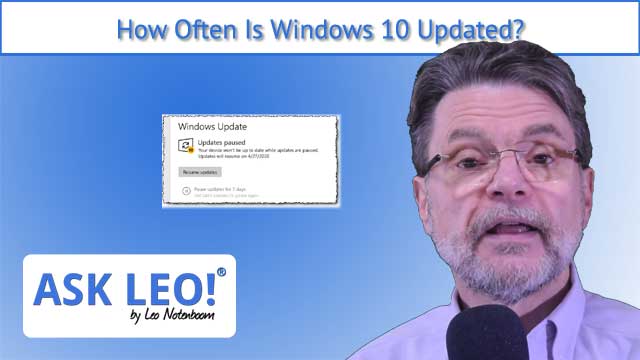 3 comments on “How Often Is Windows 10 Updated?”