I’d missed this powerful feature for way too long.

Using multiple desktops can be a great way to organize your work, and keep you focused on the task at hand.
Applies to Windows: 10

I am an idiot.

With that admission out of the way, let me explain what triggered it today: I’ve been ignoring a feature in Windows that will have dramatic impact on my focus and productivity.

“I should get around to that someday.”

Today was the day. Four and a half years after Windows 10 was released, I finally get around to Multiple Desktops. Not only is it simple, but it will alter how I use my computer.

The multiple desktop feature of Windows 10 allows you to have several full-screen desktops with different running programs and allows you to switch quickly between them. It’s like having multiple computers at your fingertips.

Multiple desktops in a nutshell

Your desktop is everything you see when you look at your computer screen. The taskbar, the applications on your screen, your mouse pointer — everything.

Multiple desktops, as its name implies, means having multiple sets of all those things.

As I type this, I have one desktop that displays my web browser, with tabs opened to several email accounts, Facebook, a WhatsApp session1, and a streaming music player.

On another desktop, I have a web browser opened to askleo.com, where I’m typing this article. I also have a text editor open on a scripting file I’m tweaking, Evernote sitting off to the side with reference information I use from time to time, and a virtual machine running Windows 10 Home, ready for me to take screenshots of what I’m talking about here.

I can switch back and forth between those two desktops with a keystroke.

The magic begins with the Task View button on your taskbar.

(If it’s not visible, right-click on the taskbar and ensure that Show Task View button is checked.)

Click on it to bring up a view of running tasks.

Task View has several additional features, including things like a timeline of apps or webpages you’ve visited recently, but I want to focus on the upper left, which includes a “+ New desktop” link.

Click on that, and the top part of the Task View display will be replaced with two desktop thumbnails and a “New desktop” link.

“Desktop 1” represents the previously-existing desktop. You can see that it shows both Edge and Mail, which I have running.

Of course, you can add even more desktops, but we’ll stick with two for now.

Click on Desktop 2, and you’ll be taken to your new, empty desktop.

With Desktop 2 active, I’ve clicked on the Microsoft Store icon, just to have an example of something different running. My machine now has two desktops.

The first is running Mail and Edge:

The second is running the Microsoft Store app:

Everything in each continues to run while I work in the other.

One way to switch between multiple desktops is by clicking on Task View in the taskbar and then clicking on the desktop you want to view.

I find the keyboard much faster. Specifically:

In each case, your entire desktop — everything you see2 — will be replaced with the contents of the desktop to which you’re moving.

Why use multiple desktops?

As the title of this article implies, for me, it’s all about focus. I can place distractions like email, Facebook, and messaging programs in a desktop of their own, and then switch away from it.

Out of sight, out of mind.

The second desktop has everything related to my work. I can focus on what I need to focus on, distraction-free.

And yet, should I need it, everything else is just a quick keystroke away.

You may find other ways to leverage multiple desktops to organize what you’re doing.

One drawback to using multiple desktops is resource usage. You’ll end up using more RAM and CPU — but not for the reason you might think.

Sure, the implementation of multiple desktops itself uses some resources, but what I’m finding is that I simply have more programs running while I’m using it. Most commonly, I have more browser windows open, each using whatever resources it uses.

And even though you might not be looking at a specific desktop and the programs running on it, they’re still running, using the resources they use.

Multiple desktops can be a very useful feature to organize what you’re doing, assuming your machine is up to it.

I should have started using it years ago. 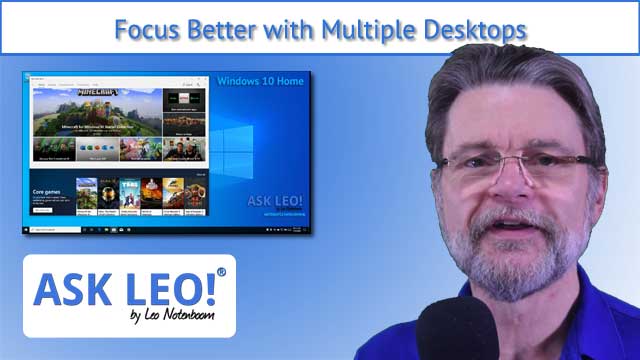 1: We think of WhatsApp as an app for your smartphone — and it is — but you can also access your phone’s WhatsApp using their web interface at web.whatsapp.com. This is invaluable for folks like me, who much prefer a “real” keyboard.

2: Including the contents of multiple monitors, if you use them.