Recently, I switched from XP to Windows 7. During loading it asked me if I
wanted 32-bit or 64-bit. I think I made a mistake when I requested 32bit. I
wasn’t sure if my machine was 32-bit or 64-bit. How would I know? I built this
machine about two years ago. Is there any way to change it to 64-bit?

Which do I want?

32 versus 64 has a number of people confused – it’s a question I get
often. In fact, it’s probably the most common “in person” question I get from
friends and acquaintances.

I won’t spend too much time on the actual differences between the
two, but focus instead on the two key issues:

Will your machine even support 64-bit processing, and if it does, do you
want it?

A “bit” is an entity that can have a value of either 0 or 1, that’s all. And that’s all that computers know how to work on. Everything is all about bits. Thinking of them in groups makes it easier for humans to think about it. As a result we have things like a byte being 8 bits, having a value in the range 0 to 255.

“There’s no easy ‘upgrade’ or way to switch from one version to the other in place.”

Computers, like humans, also work on bits in groups – typically in groups of 8, 16, 32 or 64 bits. Computers do this not to make their “understanding” of the bits any easier, but rather for a different reason entirely: speed. A 32 bit processor works on information 32 bits at a time (grossly oversimplifying here, but that’s the concept anyway), and a 64 bit processor works on it 64 bits at a time. The difference is in hardware – typically all the way from the CPU itself to the memory installed on your machine and their interconnections on the motherboard.

So, how do you know what your machine is capable of?

The quickest and easiest way I know of is to grab a free copy of SecureAble. Run it and it’ll tell you in pretty clear terms what you have: 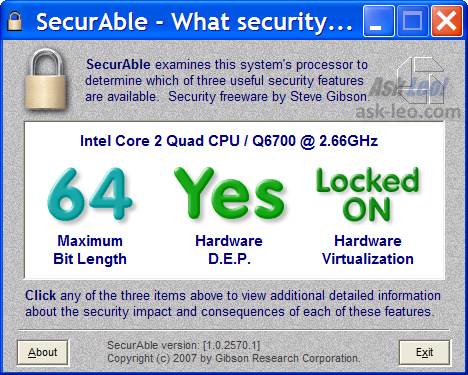 If it says 32, your decision has been made for you. You can only run the 32 bit version of Windows.

I’ve updated my position to be a bit stronger than it has been in the past. At this point I would actually suggest installing the 64-bit version of Windows – particularly if you’re looking at Windows 7.

There are two exceptions where I would still at least consider installing the 32-bit version:

Conversely, if your machine has more than 4 gigabytes of memory, then the decision is also pretty clear: 64-bit Windows is the only version of Windows that will take advantage of all that extra RAM. If your 64-bit machine is capable of having more than 4 gigabytes of memory even though it may not have it right now you may also want to consider the 64-bit version of Windows anyway, so as to automatically take advantage of that RAM when it’s installed.

The Pain of Switching

Unfortunately, it’s pretty important to think through the decision up front.

How much of a pain?

It’s a “backup, reformat and reinstall Windows” kind of pain. There’s no easy “upgrade” or way to switch from one version to the other in place.

When in doubt, if you’re still not sure, then run SecureAble and install whichever version of Windows it tells you you’re machine is capable of. That will work just great for almost all common situations. Spend some time confirming that things like printers and other devices work, and if not you can revert to 32-bit with a reinstall if you need to before you’ve gone too far.