There’s a way to keep them separate, but it’ll have a side effect you may or (may not) care about.

A Google account is the “one account to rule them all” when it comes to Google services. If you’re only using Gmail, of course, that’s your Google account.

Regardless of whether you use them, however, every Google account has access to a wide variety of Google services besides email. That includes things like Google Drive, Google Docs, Google Photos, Google Voice, Google Keep, and a plethora of others. The icons for many popular Google services are pictured to the right.

There’s no way to separate the two.1

You can certainly have multiple Google accounts.

I have at least three.

Since the account you would use for YouTube would have its own email address, you can’t really ignore its Gmail completely — YouTube notifications would get sent to it, for example — but you can choose to not use that email address for anything else.2

One of the items listed is “Add another account.” Click that and you’ll open a new browser on the other account. (“Add” kind of implies you’re creating a new account, but in reality you’re “adding” it to your set of accounts open in browser tabs.)

It’s a very handy approach to managing multiple accounts, and will indeed let you keep your Gmail and YouTube separate. The only “catch” is that you’ll have two of each. 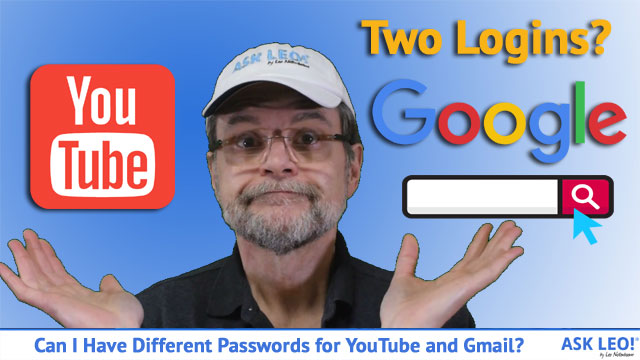 1: Many years ago, they were two separate entities, and had two separate accounts. This is no longer the case, and all former YouTube-only accounts have been migrated to be Google accounts.

5 comments on “Can I Have Different Passwords for YouTube and Gmail?”