Not quite three Just over 5 years ago (has it been that long?) I received my original
Kindle as a Christmas gift from my wife.

I wrote an article back then So, what do you
think about Kindle? and discussed some of its more immediately striking
features. I ended that article with the statement “…I think Kindle might end up changing the way I read
books.”

2.5+ 5 years later, I’m here to tell you that it has. And in some ways that,
in retrospect, I never would have predicted.

Kindle’s not about the device as much as you might think.


I now have a Kindle Fire. When I travel, it goes with me.

It’s readable. It’s portable. There’s tons of content available for it. You can purchase almost anywhere, download almost instantly, and be reading in moments. It really is that easy.

And I haven’t even touched on automatically delivered periodicals or blogs … like the fact that Ask Leo! is available on Kindle.

The conclusion I quickly came to, and that I hold to this day is that buying a book and reading it on the Kindle is easier and more convenient than lugging around a paper equivalent.

So much so that I’ve even also taken to converting lengthy emails or other documents to Kindle format so that I can more comfortably read them either from my easy chair, or while I’m out and about. Conversion is free if you’re willing to move the content to the device over the USB connection.

But that’s not really the point I want to make here. I think there’s something going on here that, honestly, transcends the Kindle device.

Last year I purchased a Kindle (second generation) for my wife. In many ways, it’s the same and in many ways quite different than my own. There’s no point in comparing them, since the second generation is the only one available via Amazon, but you’ll note that I haven’t run to upgrade my original. While some things were improved (accidental page turns), there were a few things that the original Kindle has that I would honestly miss (the external radio on/off switch, for example).

Again, the device – and the additional, larger, Kindle DX that was added to the line up – isn’t the point.

My wife and I share an Amazon account. Both our Kindles are registered with that same account. As a result, all the books we each buy are available on either her Kindle or mine, immediately or with a simple download request.

Now, on the surface this doesn’t seem like a big deal. Most books can be shared on up to 6 devices registered to the same account. Sharing between family members seems like a good move on their part, and of course it was.

I’m now convinced that it was the just tip of the iceberg.

You see, today when I buy a book I can read it on my Kindle.

Or my wife’s Kindle.

Or on my laptop.

Or on my phone.

Or on all of the above interchangeably. In fact I found myself doing that just recently, and as I was doing it, it dawned on me that the device – as good as it is – isn’t the real story any more. 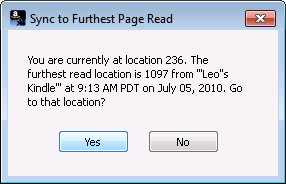 It’s not about the device any more, it’s the ubiquity of content. 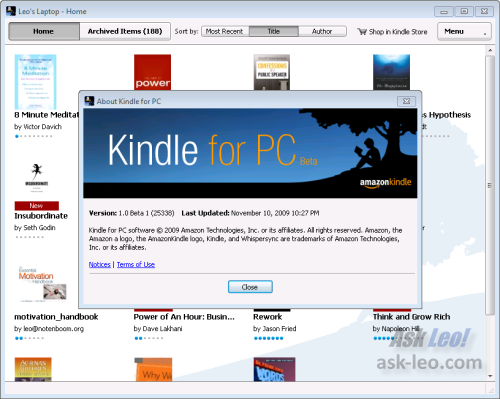 Kindle for the PC (and presumably Kindle for Mac) works and works well. Much like your Kindle you can download specific books to be kept on the PC while still retaining access to all the books you’ve purchased through your account at any time. It looks and reads great. In some cases, it’s a great alternative approach to viewing certain types of content. For example, Kindle books that include images or illustrations that don’t render quite as nicely on the Kindle device. A nice touch: notes that you might take while on your device become available on your PC’s Kindle application as well.

Kindle for Android (and presumably Kindle for iPhone, iPad and others) also works surprisingly well. The biggest limitation isn’t the software at all, but the screen. With most of these newer generation large screens reading – yes, even reading a book – is amazingly comfortable.

And it’s in your pocket or purse wherever you may be.

To top it all off (and perhaps an insight into Amazon’s overall strategy) I don’t believe you even need to own a Kindle device in order to purchase and read Kindle books on your PC, Mac, iPad or mobile device.

Like I said, it’s not about the device any more.

Yes, the Kindle is a good device. But it’s also a platform. A reading platform.

It’s not perfect – there are certainly limitations (no search in the non-device applications, is a good example) and areas for improvement. Though, improvements do continue: if anything ever gets me to move from my first generation Kindle it’ll be some of the software upgrades that include folders and native PDF support.

And of course if you’re uncomfortable with digital rights management (DRM) then any system such as the Kindle where you can only read your content on devices linked to your account and authorized isn’t something you’ll be interested in.

But for me, it’s become the best way to read a book.

Wherever I happen to be.

Yes. I recommend it.