I read your article about CCleaner’s file deletion overwrite, which I tried
on my Windows Vista. Mine took about three hours to do. My question is how
often should I use this file deletion in general? Once per month? I am really
clueless about that. I am referring to the CCleaner’s wipe section.

Well, let me put it this way….

I never run it.

With that having been said, let’s look at why you might want to run it, and
from that, see if we can come up with some ideas for how often it might make
sense to run.

By now, I think that most people realize that when you delete a file – even emptying the Recycle Bin, if that was used – the data that was contained in the file remains on the disk. The area that contains the data is marked as free, but the data is not actually overwritten until a new file is written in exactly the same place sometime later.

And later could be milliseconds or it could be months.

Thus, until that overwrite actually happens, we have the ability to “un-delete” a file using tools like Recuva. 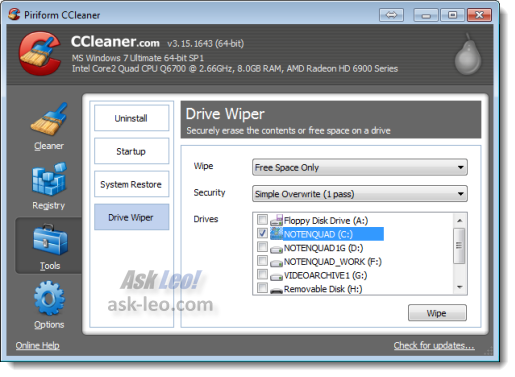 CCleaner’s Drive Wiper is one example of a tool that is meant to remove this ability to undelete.

The concept is simple. The drive wiper just writes data of some sort in all of the spaces on your hard disk where no files are currently stored: all the space that’s marked as free. As a result, anything left in that free space that could have been used to recover or un-delete a file is removed.

If you have a lot of free space, that could take some time.

Now, to your real question: how often should you do this?

To me, it depends on three things:

It’s that last one that, for me, reduces the need for free space wiping to near zero for most people.

Face it, folks. We’re just not that interesting.

And, perhaps more to the point, there’s probably much more interesting stuff in the files that haven’t been deleted. If a thief wants to go spelunking for data, they’ll probably find plenty in the files and folders that already exist.

Sometimes they are after you

On the other hand, perhaps you are the target of someone’s attention. Perhaps you do have a sensitive job or work in a sensitive industry where data theft and espionage are not only possible, but even likely.

There are several additional steps (like encryption) that you should be taking, but when it comes to free-space wiping, then I’d be doing it often.

If it’s important, I’d do it nightly.

But, as I said, it’s just not that important for the vast majority of people.

Sometimes, they’re really, REALLY after you

Everything that I’ve discussed above applies to what CCleaner terms a “Simple Overwrite (1 pass)”. A simple overwrite does exactly what’s described above: it overwrites the free space and prevents common file recovery utilities from undeleting deleted files.

If someone is seriously after your data, that could potentially be not enough.

As I discussed in What difference does multiple-overwrite delete really make? there are techniques – expensive techniques – that can be used by those who are sufficiently motivated that may be able to recover some or all of the data that has been overwritten once.

The solution is to overwrite it more than once. CCleaner offers the option of overwriting 3, 7, and even 35 times.

And once again, three is overkill for the average user.

12 comments on “How often should I wipe my disks free space?”