This is another of those questions I asked myself. I’m finding myself
spending more time in rural Washington state, with more expected. My primary
way of staying connected to the internet is my cellular phone’s data plan, but
out here on the farm we’re in a fringe area. Coverage is weak, and disconnects
are common.

Correction: they were common. I’ve got quite a good connection as
I’m writing this.

Here’s what I did…

In a prior podcast, “Mobile Connectivity –
Staying Connected on the Road“, I talked about how I stay connected to the
internet when I travel. It boils down to:

With that setup I regularly get around 145kbs, or 4 times dial-up speed,
when I have a strong signal.

In researching how others have solved this problem, I stumbled across a
couple of posts in an Recreational Vehicle forum that discussed using external
antennas on cellular phones. Sure enough, the Treo does have a plug for an
external antenna, and in fact most hand-held units do these days.

Based on that my first purchase was a Wilson Dual Band Magnetic Mount Cellular Phone Antenna, and an
antenna adapter for my Treo.

I opted for the magnetic mount, rather than a permanent mount, for
flexibility. Today I use it in my RV, but it’s equally well suited for my car
or elsewhere. The only problem is that the magnetic mount not only expects to
be, well, mounted magnetically, it actually relies on the metal surface it’s
attached to to act as a ground plane. The antenna alone isn’t enough – it needs
to be attached to metal. My RV has an aluminum body, so while that might work
for the signal, the magnet won’t stick.

Based on a couple of recommendations, here’s a photo of the solution: 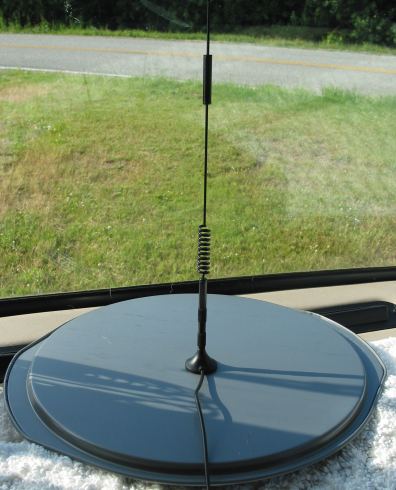 What you’re seeing on my RV’s dashboard is the antenna mounted to … a 12
inch pizza pan. A metal pizza pan, that I picked up at my local
grocery store. I was skeptical, as you probably are, until I used it. This
setup alone increased my phone’s reception by at least one ‘bar’ on the signal
strength display.

But decided to take the next step as well. I then purchased a Wilson 3 Watt Direct Connect Cellular Amplifier and inserted it
between the antenna and my phone.

Hand-held cell phones are limited both by their size and by the law. They
can transmit at a maximum strength of 600 milliwatts, for example. However
larger external units, such as the phones actually installed into automobiles,
are allowed transmit at up to 3 watts. And that’s what the external amplifier
does. Not only it is a better receiver (at least another bar on the signal
strength display) but it transmits a stronger signal.

The net result is that even here on what used to be the fringe, I now get a
strong cellular signal for voice, and for data. And given what I do for a
living, that data signal’s pretty important.

7 comments on “How do you stay connected in weak cellular areas?”