Over the past weeks on my machine:

Did I royally screw things up by disabling System Restore? I understand by
doing this, I erased all existing restore points so that wouldn’t surprise
me.

First, let me say this…

You’ve got a serious infection here that some of us would technically characterize as a “mess”.

In all honesty, I’m not sure that the patient will survive.

Before we bring out the big guns, let’s run through the steps that I’d consider using to try and recover without just giving up and starting over.

Then, after all that, I’ll explain why starting over might well be the most pragmatic, safest thing to do. 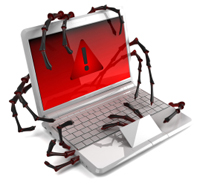 If your machine is working properly at this point and all scans return nothing found, you can start to breathe a sigh of relief.

“The bottom line is that even after all of the steps to remove the problem, there’s simply no guarantee that you did.”

If your system is still infected after all of that, then things begin to look fairly bleak. It’s at this point that I typically throw my hands up and move on to this:

While that’s a shorter and clearer list, it’s also a fair amount of work.

But here’s the deal: when all is said and done, it’s often less work than all of the flailing around for days trying to remove a virus. Frequently, you’ll spend less total time starting over in this manner than you would trying to “fix things”.

Starting over is the only guarantee

At the end of the recovery checklist above, we assume that if things appear to be operating properly and the tools don’t report any infections that we must have successfully eradicated the threat.

The problem is simple: once your machine has been infected with malware, it’s not your machine any more. The malware authors could have done just about anything, including installing malware that appears not to impact your system and avoids detection.

The bottom line is that even after all of the steps to remove the problem, there’s simply no guarantee that you did.

I hate to say it and I know that it’s not always practical, but once infected, the only way to guarantee that you’re no longer infected is to reformat and reinstall.

What I’ve just given you is the long version of all of the steps that you might take to recover from a malware infestation.

Here’s a much, much shorter version:

Of course, it assumes that you’ve been backing up regularly and properly. If you haven’t been, then this one-step solution simply isn’t available to you.

Now, perhaps, you can see why frequent full-system backups are so valuable. Do them daily and recovery from these kinds of crisis are often as simple as “restore to yesterday’s backup”.

What about System Restore

I tend to think of System Restore as a glorified registry backup and not a lot more. Yes, it does more than that, but what it doesn’t do is restore files to their pre-infected state. It can remove some symptoms of malware but it doesn’t actually remove the malware.

Turning off System Restore as you describe for the malware scans can make sense and certainly wouldn’t make things worse. In a sense, it gets System Restore “out of the way” to allow the anti-malware tools to clean up what they find.

But that’s about it.

I hear of enough failures with System Restore – both technically and with respect to what people expect it to do that it does not – that I simply disable it completely. I rely on my regular backups instead.

If you quickly get re-infected … well, that would concern me.

It means that in addition to doing what I’ve outlined above to recover from the infect, you also need to re-evaluate your safety measures and your own behavior.

Naturally, using things like anti-malware tools and firewalls and keeping your system as up to date as possible are all important and you should make sure that those are in place and properly configured.

Perhaps what’s even more important are your own habits. No amount of security software can protect you from yourself. Make sure that you’re approaching the internet with the appropriate amount of skepticism and not opening unidentified attachments, visiting malicious web sites, downloading from untrusted sites and so on.

If you’re not backing up, do so. Start with How do I backup my computer? There’s also a full list of articles on maintenance and backup that might be of interest.

It’s probably also worth reviewing what I consider perhaps the most important article on Ask Leo! – Internet Safety: How do I keep my computer safe on the internet? Review your situation and make sure that you’re doing everything that you can to keep a malware infection from reoccurring.

(This is an update to an article originally published January 30, 2005.)

52 comments on “How do I recover from a bad virus infection?”