I use Windows XP and am wanting to rid my computer of programs that I never use or rarely use. I know about using the removal function in the control panel. My question has to do with “How do I know that it’s okay to remove these program?”

For example, I have a program that’s called “Java2 Runtime Environment SE v1.4.2_03” This program takes up 135.00MB and it’s used “Rarely.” I have several programs like this that are used “Rarely.” It is okay to remove them?

It’s my experience that “rarely” is rarely accurate. I have no idea how that moniker is created, but for the most part my sense is – it ain’t right. I just checked, and a program that I use quite literally every day (the HTML editor in which I write these articles) is listed as being used “rarely”, and last used about 5 months ago.

That’s so wrong as to completely remove any trust I have in any of the other tags of “rarely” in the Add/Remove entries.

Unfortunately, that kind of limits the information we have at hand in order to make our decisions. 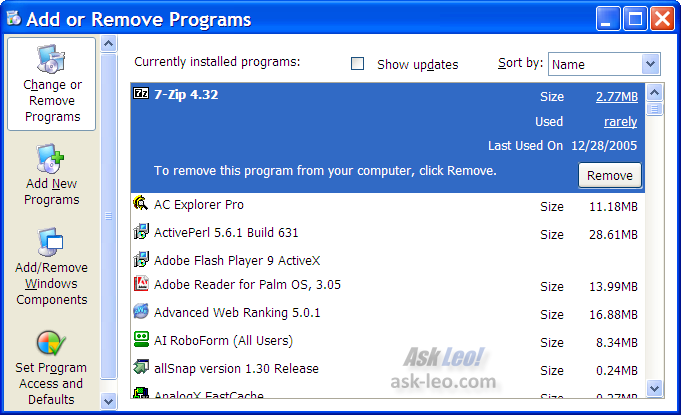 I rarely do what you’re doing. My experience is that as a cleanup measure it’s not really that effective. The amount of disk space recovered is typically small compared to the size of the drive, and there’s rarely any performance gain. In fact, the only time I use add/remove at all is if there’s a specific program I’ve identified that’s causing me some kind of grief, and where I’ve decided that uninstalling it is the way to remove the problem.

So ultimately, I’m going to suggest that you consider doing the same – don’t bother uninstalling something unless you have a specific reason to do so. The time invested typically isn’t worth the return.

If you want to do it anyway, then I have a single, simple rule of thumb: uninstall only items that you’re certain of. (OK, there’s another rule “in front of” that: backup first, just in case. But you already knew that, right?

Your Java2 Runtime environment is a great example. If you’re not sure, don’t uninstall it.

In the case of Java, it’s support software installed on your machine and used by some web sites to provide rich or interactive experiences when you visit. It’s often used for games or chat features, but can be used for much much more. Do you need it? No idea – it depends on what web sites you visit. Is it safe to delete? Probably, but it’ll also likely come back the first time you visit a web site that needs it. Is it safe to leave? Almost certainly.

But that’s just one entry in a long list of add/remove entries. What about the rest?

In short I suggest:

That last one boils down to “Google it”. Or Google “What is ” followed by the name of the software or entry listed in Add/Remove programs.

The problem is that there’s so much software – be it applications, application components, updates or support systems like Java – that could show up in that list there’s simply no comprehensive way to know what they all could possibly be, nor any rule of thumb we can use to determine how useful they are or are not.

And as we’ve seen, we certainly can’t rely on the “Used: rarely” indication.

11 comments on “How do I know what programs are safe to uninstall?”